Spotlight on: Dr. Vivian Carpenter, author of “The Fifth Letter”

“None of us get to go through life without having the rug pulled up from under us at some point.”

For Dr. Vivian Carpenter, that rug was pulled early in life.

In addition to becoming a widow at the young age of 25, Carpenter had to overcome sexism and racism in a world that told her success, for her, was impossible. Instead of using the noise of the naysayers as a reason to fail, she used it as fuel to her success. As an educator, philanthropist and author, she’s committed her career and community efforts to creating educational and economic opportunities for all.

As one of the first African-Americans to graduate from the Industrial Engineering and Operations Research Department at the University of Michigan, she learned how to lead big projects that impact the development of factories, creating more designs that are functional for the human being overall. In the height of her career, she seemed to have it all—being employed by industry giants such as Ford Motor Company and Arthur Andersen, and pursuing her Ph.D. in Accounting of the University of Michigan. But nothing could prepare her for the life-changing challenges ahead.

Her husband fell dead on the basketball court.

“Having to go through that trauma caused me to really go deep within myself and, for the first time, really figure out where I was on a spiritual level,” she said. “I either had to get up and operate from a basis of faith, or I was never going to be quite the same.”

During that experience, when she felt like she was losing herself, she actually found out her true identity.

“Resiliency is the key. It’s the only difference, really, between those that are successful and those who aren’t because everybody has that low moment in life,” she said. In that moment, I decided I had to come back from that. I had to go back to school. I had to complete my incomplete.”

But it was in that low point that Carpenter was taken even higher. She received a phone call from Loren Monroe, the first black state treasurer in the State of Michigan, asking her to become the Deputy State Treasurer of the State of Michigan, with six departments reporting to her. That’s when she realized that even the challenges that had come so suddenly were simply preparation for her future success. It also positioned her to make a greater impact in her local community.

When The Music Hall, one of Detroit’s entertainment jewels, was at risk of closing, Carpenter organized community leaders and corporations to raise 1.7 million to keep the venue open. 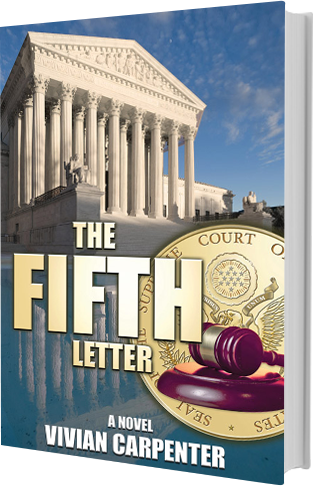 When she’s not serving the community or speaking at a business symposium, she’s writing. Her new literary work, The Fifth Letter, is a political thriller packed with black history facts, African-American struggles and even a love story.

In addition to her books, her community efforts and professional accomplishments, Carpenter seeks to leave a legacy that will catapult students to their fullest potential.

“I have a vision for an entire campus—a campus that helps students, from a diversity of backgrounds, develop to their fullest potential. Maybe I can’t do it all, but I would like to have left at least one step on the ladder to solving that issue for this nation and Detroit.”

To hear the podcast with me and Dr. Vivian Carpenter, go here

2 thoughts on “Spotlight on: Dr. Vivian Carpenter, author of “The Fifth Letter””