How to Accomplish Goals, Discover Your Purpose, and Follow Your Dreams – Talk with Dr. Gail Hayes

Most great leaders aren’t trained or coached to lead. They’re born with it. That innate ability to lead people, to 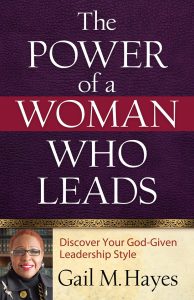 drive others to get the job done where it seems it can’t be done. But Dr. Gail Hayes, television and radio host, much sought after international conference speaker, executive leadership coach and author argues that if you don’t know who you are, you can’t lead effectively.

“People try to emulate other people who may not have anything in common with them or their purpose,” she said. “So some people use others as an incorrect barometer of where they should be and who they should become.”

In her latest book, The Power of a Woman Who Leads, Hayes describes six different types of leadership styles—one of which every woman falls into.

Her first concern is for people. She always supports a cause. While she always likes to work in the background, just because she’s in the background doesn’t mean she’s not leading. She’ll start a homeless shelter or run a clothing drive.

She’s not going to move unless you have a plan in place. She likes to “dot every ‘i’ and cross every ‘t’ before she moves. She needs to have an equipment checklist. Sometimes, she makes people angry because she is a born planner. But, that’s what she does. She brings the method to the madness.

If you can’t give her flexibility, she gets frustrated. The tactical leader is the one who gets in the flow of the battle. The strategic leader will give her the battle plans and she’ll say, “I need you to take this city.” She wants everything her way.

She has to be able to create her own way, her own method of doing things. She loves the flow of creativity and she activates that in her team. If you give her a project, she’ll change the whole project and it will be better than what you ever imagined. She thrives when she can flow in her creativity.

For more information and to hear the podcast where I interviewed Dr. Gail, click here

or to order your copy of The Power of a Woman to Lead, visit www.handleyourbusinessgirl.com.

5 thoughts on “How to Accomplish Goals, Discover Your Purpose, and Follow Your Dreams – Talk with Dr. Gail Hayes”